After a desperate attempt to get his family on the first evacuation flight from locked-down Wuhan amid the coronavirus outbreak, a Wisconsin father can at last breathe a sigh of relief that his wife and two young daughters are back stateside.

Now, the family just has to wait a long two weeks of quarantine period to be reunited in Wisconsin, which just announced its first case of coronavirus – one of 12 in the US – on Wednesday.

Daisy, Adalynn and Abigail Roth managed to get on one of the two US planes out of Wuhan that arrived Wednesday and are now being held at a hotel on Travis Air Force Base near San Francisco.

It’s been a long journey, and Daisy and her children are still thousands of miles from home, but husband Sam said his family is both exhausted and relieved to be back on US soil.

Abigail Roth, five, wore a face mask during her harrowing journey back to the US from Wuhan with her mother and sister. The family is now under quarantine in California 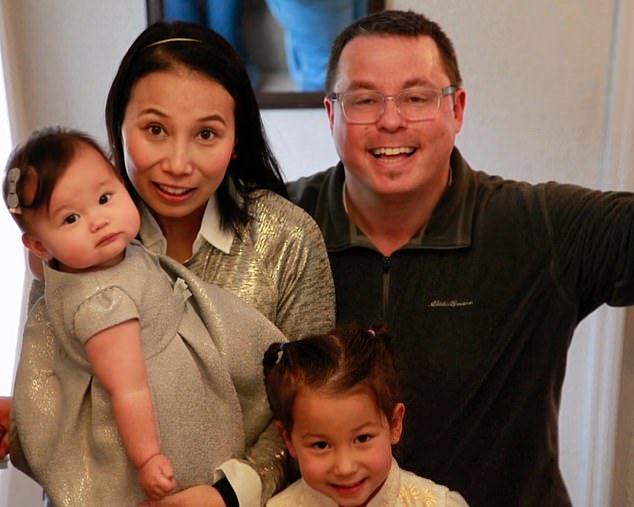 Just after Daisy (top left), Abigail (far left, age 10 months) and Adalynn (bottom right) arrived in Wuhan, China, the city was put in lock down amid the coronavirus outbreak. Now, father, Sam (right) is begging the State Department to let his family on the last flight out of the city so they can return home to Wisconsin

Daisy and her daughters were among the 500 Americans who returned stateside Wednesday, but hundreds more were left behind, waiting anxiously for word that it’s time to go home.

The Roth family saw the news of a few cases of pneumonia cropping up in China ahead of the Lunar New Year, but they weren’t concerned.

Daisy is from China and Sam lived there for years. They aren’t ones to panic over news from Daisy’s home country, and figured that the slew of illnesses would blow over and be forgotten by the time Daisy and the children arrived in Wuhan.

So they left their travel plans intact and  boarded a flight last month.

But the sporadic illnesses turned out not to be sporadic at all. Chinese health authorities identified the cause – a never-before-seen coronavirus – and cases surged.

Soon, there were no more flight, trains, buses or cars out of Wuhan, the city where the virus emerged and where Daisy and her daughters were staying with family.

Save one: a single 250-seat evacuation flight out of Wuhan back to the US, sent mostly to rescue diplomats and government employees, but with a few seats leftover for private

Back in Wisconsin, Sam wasted no time. He immediately wrote to the State Department and took to Facebook and Twitter, begging for his wife and kids to be on that flight. 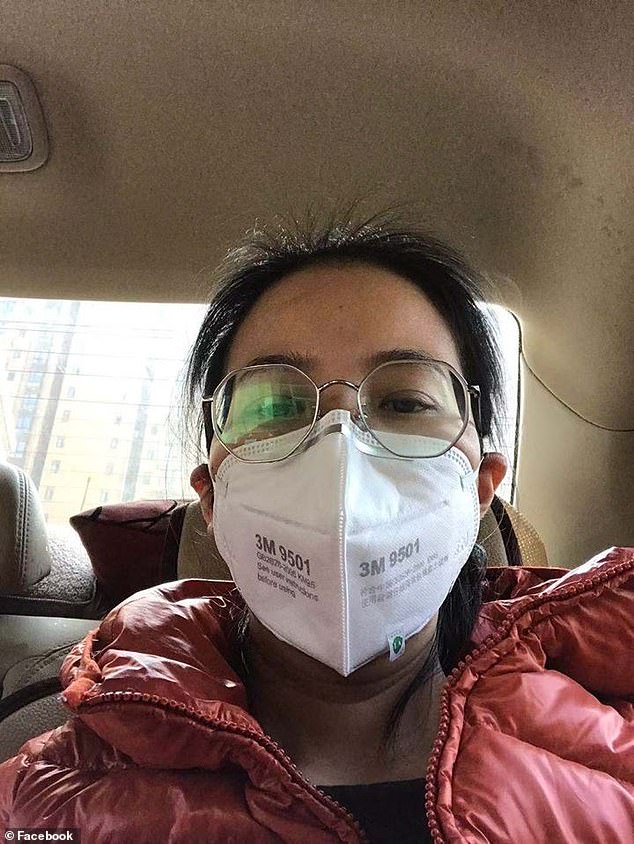 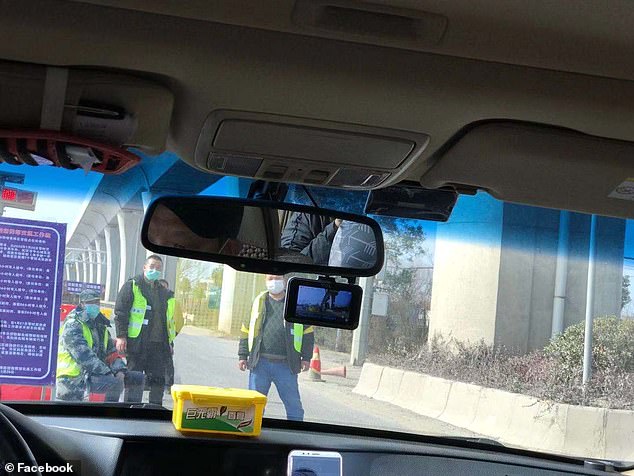 During the two hour drive to the airport in Wuhan, the Roth family had to stop at multiple checkpoints where authorities checked that they were on the US embassy’s list 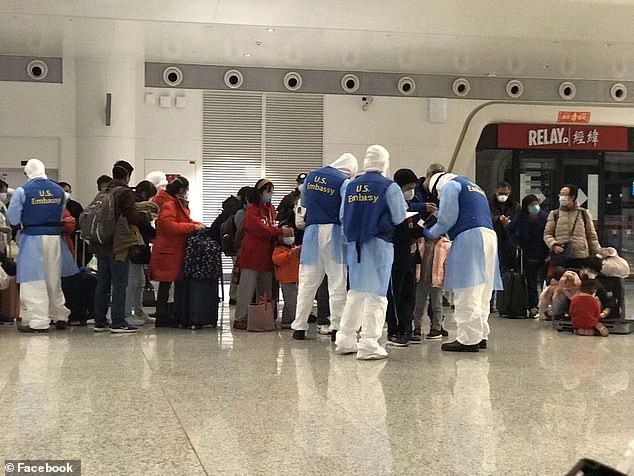 ‘My family is currently in lockdown in Wuhan,’ Sam plead on Twitter.

‘When will my wife and two daughters, one of whom is only 10-months-old, be offered seats on the chartered flight?’

They didn’t make it onto that first flight. But at least Daisy, Adalynn and Abigail were then on the State Department’s radar.

And within a week, they got the notice they were waiting for: There were more planes coming, and there were seats for them.

‘Then you’ve got to find a private car,’ to get to the airport through a city where all public transit and vehicles are locked down. 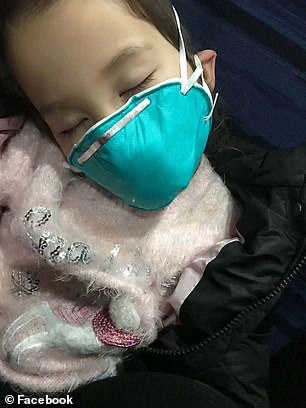 Daisy’s uncle agreed to take her and her daughters to the airport, driving two hours through check point after check point across the city.

Long though the car trip was, it was ‘smoother than I expected,’ Sam said.

First thing when they arrived at the airport, Daisy, Adalynn and Abigail’s temperatures were checked.

Then they waited – 17 hours of waiting at an airport deserted by staff except for janitorial workers and health and government employees.

In a video Sam posted on Facebook, Adalynn, age five, nods off while

The Roth family was subjected to yet another temperature check then, at long last, they boarded the second flight out of Wuhan to the US since the city was locked down.

It was hardly a glamorous affair. Plastic drop cloths separated some of the plane’s seats, and Daisy and her children wore face masks for the duration of their travel. But it didn’t matter. They were on the way home.

‘They were just so tired, I think they fell asleep for most of the flight,’ Sam said.

Finally they touched down in California.

After more health checks, the family was whisked to quarantine, which Sam believes is a hotel on the Travis Air Base.

It’s not home, but at least it offers some much needed creature comforts. 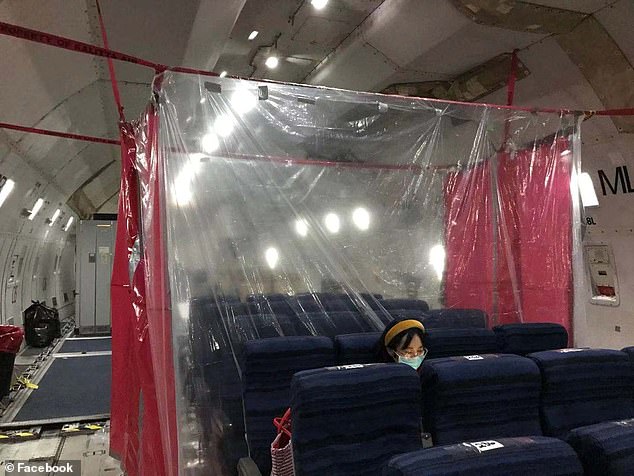 The plane was hardly glamorous, with a plastic drop cloth partitioning some of the seats 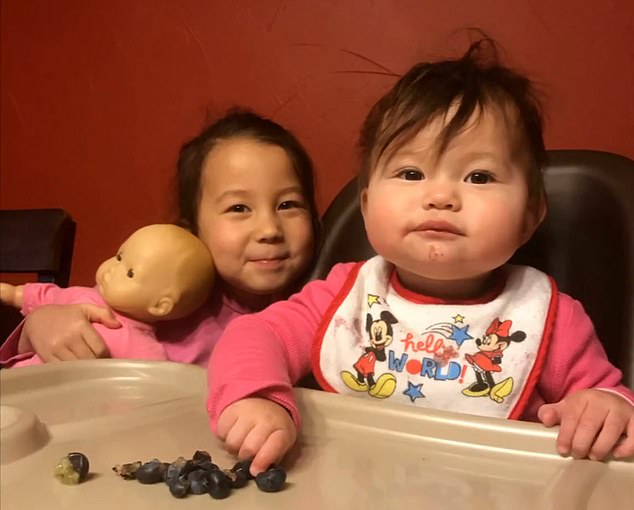 Sam had pleaded with the State Department to evacuate his family, including young daughters Abigail (left), five, and Adalynn (right), who is just 10 months old 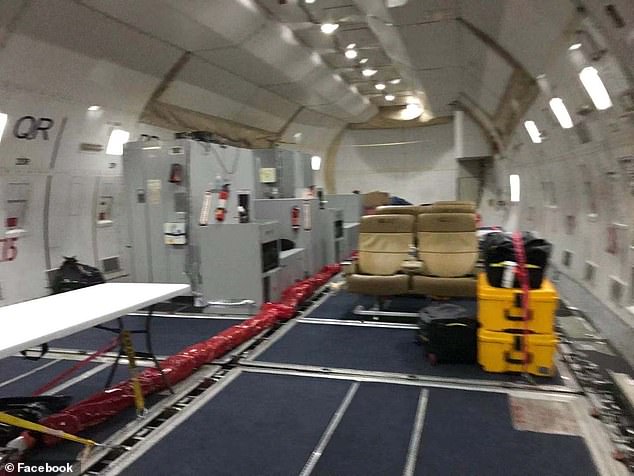 Daisy, Abigail and Adalynn were among the 500 passengers flow back to the US on two evacuation planes. Pictured: the interior of the Roth family’s plane

‘It really seems like whomever organized this quarantine was very aware of the necessities, at least for my family,’ Sam says.

‘There was a Mickey Mouse doll, and baby wipes and baby food…all those things already in the hotel room when they got there.’

Sam has since talked to his wife and, so far, the whole family is healthy, exhausted and just happy to be back stateside.

But even his five-year-old daughter, Abigail, has noticed the stress of the situation and the importance of the family looking out for one another.

Daisy wrote to Sam: ‘Abby this morning said, “hey, mom, you’ve done so much for us and you must be tired. Take a rest, and I’ll take care of Adalynn”‘ – the couple’s 10-month old daughter – ‘”I love you,”‘ Sam relayed.

‘Some times they really can impress you. I’m really happy they’re back and just hope this quarantine goes over smoothly and we can be back together as as family soon enough.’

Do detergents cause childhood asthma? Cases of the disease rise 37% in ‘extra clean’ homes

Alesha Dixon health: The Greatest Dancer judge reveals ‘niggle’ in her brain – what is it?

New York City says it has met a target in the...