A surge in the amount of money stored in pension pots and property has driven the nation’s net wealth up sharply over the last few years.

Between April 2016 and March 2018, the total net wealth of Britain’s households swelled to £14.6trillion, marking an increase of 13 per cent on the previous two years, official figures from the Office for National Statistics reveal.

By the end of March last year, households across the country had a median household net wealth of £286,600, which is £24,500 more than in the previous two year period.

The biggest chunk of Britain’s wealth comes from private pension pots, comprising 42 per cent of the wealth pie, and forming a greater contribution than property.

Mapped: Median household wealth by region, according to figures from the ONS 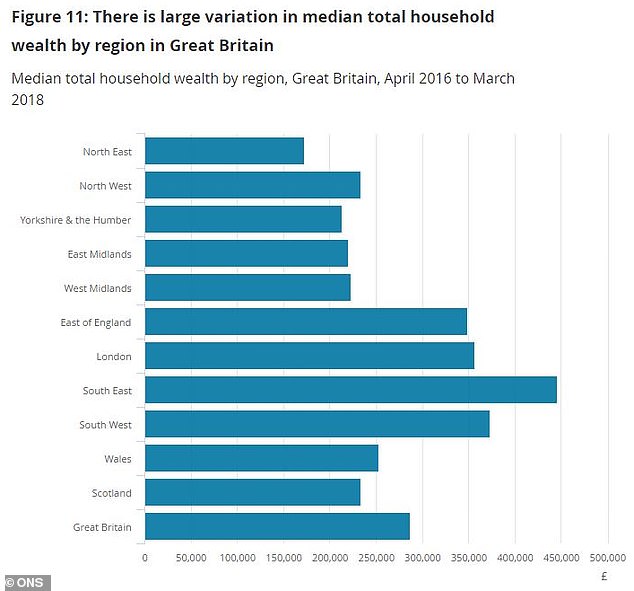 How much do you have? Median total household wealth by region, according to the ONS

Household wealth covers anything from property assets minus mortgage liabilities, net financial wealth, including cash in savings accounts or stocks and shares Isas less any liabilities, pension pots, and  ‘physical’ items like cars, antiques and artwork.

While national and household wealth is on the up, on a regional level, there are stark variations up and down the country.

Households in the South East and London are among the wealthiest in the country, while those in the North East and the East Midlands are yet to see their wealth rise above levels seen between July 2006 to July 2008.

Growth in the total value of household wealth over time reflects a number of factors, including a growing and ageing population and the rates of return on different forms of wealth, the ONS added.

While the average median household wealth stands at the £286,600 mark, this figure can vary wildly depending on where you live.

The South East, the South West and London have the highest median wealth levels in the country, with the South East taking the top spot at £445,900.

‘Changes in net property and pension wealth are the major factors driving changes to total wealth’, the ONS said. 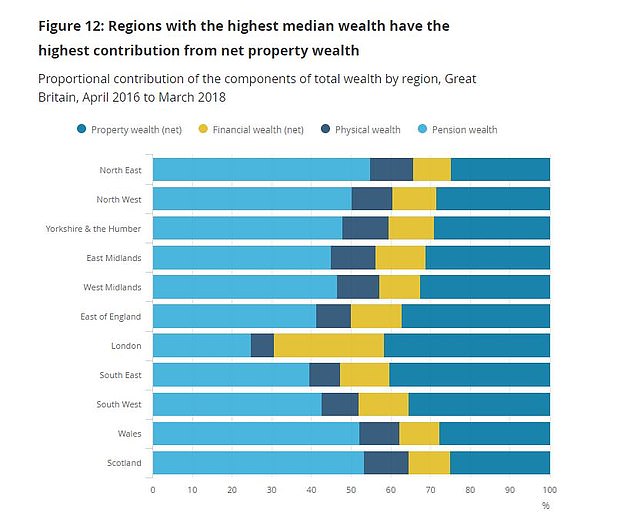 Breaking it down: Regional variations of wealth broken down into different components

The region with the lowest median total wealth was the North East, at £172,900.

Delving deeper into the numbers, it is clear that net property wealth and pensions are the dominant components of total wealth in all regions except London.

Meanwhile, physical wealth, like antiques, cars and artwork, and net financial wealth, such as cash in bank accounts or even hidden behind the sofa, are minor contributors to total wealth in all regions apart from London. 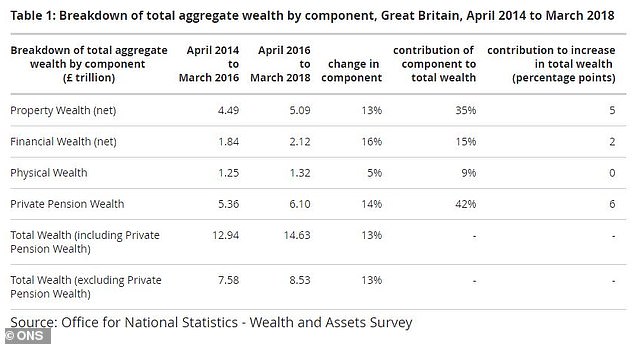 Breaking down the data: Pensions and property comprise a large chunk of the nation’s wealth

Pension wealth is on the up

It would be easy to assume that property would make up the biggest slice of the country’s wealth.

However, money from private pension pots comprises 42 per cent of the nation’s total household wealth, making it the biggest contributor to our pockets.

The ONS’ figures reveal that total private pension wealth across the country was £6.1trillion from April 2016 to March 2018.

To put the scale of this into perspective, in June 2006 to June 2008, money from private pension pots comprised only 34 per cent or £3.6trillion of the nation’s wealth as a whole. 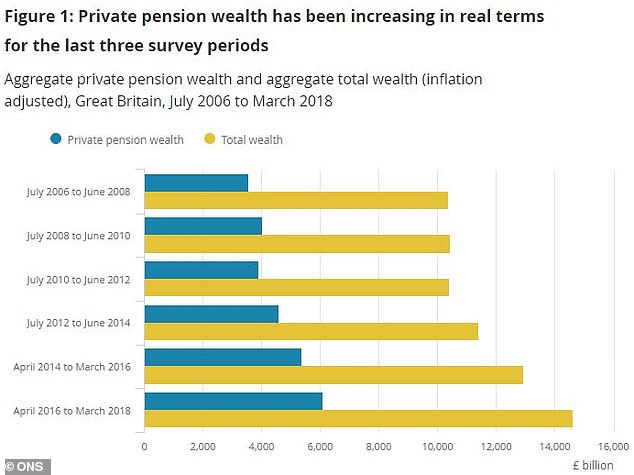 The percentage of adults below the state pension age actively contributing to a private pension has increased from 43 per cent in July 2010 to June 2012, to 53 per cent in April 2016 to March 2018, the data shows.

Nathan Long, a senior analyst at Hargreaves Lansdown, said the ONS figures show ‘evidence of a littering of discarded pension plans, as people are moved from pension to pension each time they change employer.’

Mr Long thinks the Government should seek to grant people the right to have their employer pay into their choice of pension ‘so people can take control of their own retirement.’

How big is your pension pot?

‘After all, you wouldn’t expect to switch your bank account every time you change jobs’, Mr Long added.

For those aged 65 years and over, median pension wealth for pensions in payment for men is double that for women.

Mr Long said: ‘The gulf between men and women’s pensions shows an interesting nuance with values being far closer between those building up their pension than those who are receiving their pension.

‘This perhaps shows why Labour have included a policy of hefty compensation for women who have had their state pension pushed back in their manifesto.’

Emma-Lou Montgomery, an associate director at Fidelity International, adds further insight into the figures’ revelations about pension pots and gender.

She said: ‘It’s positive to see an overall increase in private pension savings since March 2018, but that doesn’t tell the whole story.

‘The gender pension gap continues to cripple women’s potential retirement lifestyle. From April 2016 to March 2018, more men under 65 years old had active private pensions than women of the same age, 56 per cent to 51 per cent respectively.

‘In addition, the wealth in women’s pension pots is significantly lower, with a savings gap of over £5,000.

‘This is particularly concerning when you take into account the fact that women are likely to need their savings to last for a longer period of time and may be subject to career gaps.’ 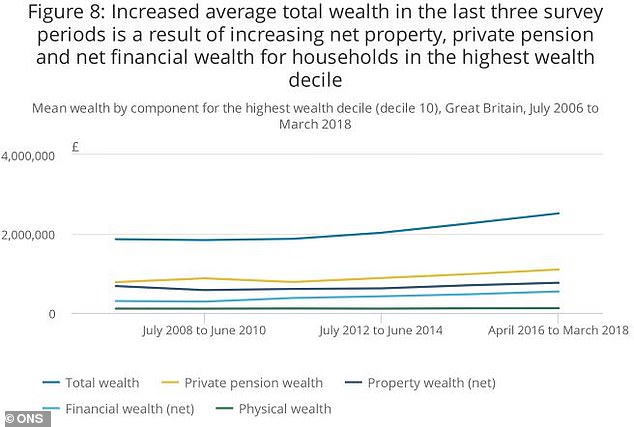 Contributions: Even for the ultra-rich, pension pots play an important part in household wealth

Our obsession with property continues

As a nation, we are obsessed with property, and this fact continues to be reflected in the ONS’ latest snapshot into the nation’s wealth.

Property comprises 35 per cent of the country’s total wealth, marking an increase of 15 per cent on the 2014 to 2016 period.

The hikes in net property wealth over recent years are largely due to rising house prices, as well as an increasing number of homeowners owning their property outright rather than with a mortgage, the ONS said.

The ONS’ data also shows that Inequality in net property wealth and net financial wealth has increased between July 2006 to June 2008 and April 2016 to March 2018, while inequality in pension wealth has fallen. 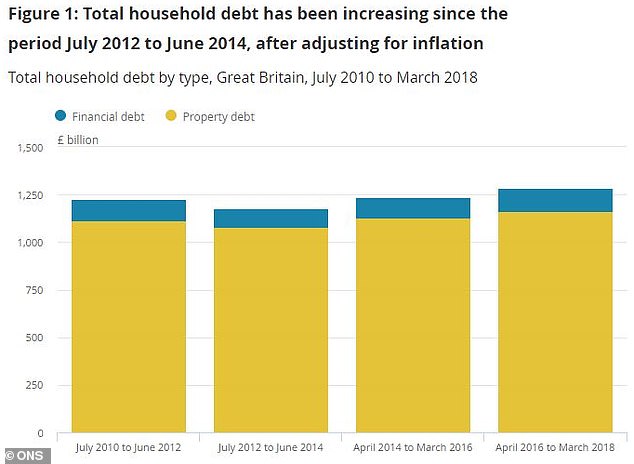 While the data form the ONS points appears relatively positive in terms of the rise in household wealth, the household debt figure is growing.

Total household debt across the country was £1.28trillion in April 2016 to March 2018, of which £119billion, or 9 per cent, was financial debt and £1.16trillion, or 91 per cent, was property debt, comprising primarily of mortgages and equity release.

What is the Wealth and Assets Survey and why is it important?

The Wealth and Assets Survey launched in 2006 and is a survey conducted by the Office for National Statistics.

The survey is important because it measures the well-being of households and individuals in terms of their assets, savings and debt and planning for retirement.

To work out how wealthy we are on a household and national level, the ONS takes into account an array of data, including money from private pension pots, ‘physical’ wealth stemming from assets like cars or artwork, net property wealth (which is how much a property is deemed to be worth less any outstanding mortgage repayments or loans secured on the property).

Net financial wealth is also taking into account, and includes anything from cash in a bank account, a stocks and shares Isa, endowments and even money hidden behind the sofa or under the bed (less any liabilities like outstanding credit card payments or loans).

Total household financial debt rose by £12billion over the period, up from £107billion in April 2014 to March 2016, with most of the change accounted for by increased hire purchase debt and student loans from the Student Loans Company, which came in at around £7billion.

Discussing the debt figures, the ONS said: ‘Increases in total household property debt and total household financial debt in the latest period were driven by a combination of both an increase in the number of households with debt and increasing levels of debt.’

The poorest half of households held 36 per cent of total household debt in April 2016 to March 2018, the ONS said.

Sarah Coles, a personal finance expert at Hargreaves Lansdown, said the ONS figures highlighted a massive burden of debt and has provided some tips to help people improve their household finances.

Ms Coles said: ‘If you’re not shopping around for utilities, media, mobile, broadband and groceries it’s a good place to start.

‘If you’ve already done these easy steps, you may need to make tougher decisions about lifestyle sacrifices you can make to cut costs. You can then use any money you free up to start paying off your most expensive debts.

‘While you’re repaying, it’s pointless forking out more than you need to in interest, so consider switching somewhere like a low cost loan or a credit card with a 0% introductory period, to save.

‘The only proviso is that you can’t see this as an excuse just to spend more money or you’ll end up doing more harm than good.’

Some links in this article may be affiliate links. If you click on them we may earn a small commission. That helps us fund This Is Money, and keep it free to use. We do not write articles to promote products. We do not allow any commercial relationship to affect our editorial independence.

Odey threatens to vote NO to Sirius deal: what next for shareholders?

A corking good idea: Super-warm, tactile and easy to build –...